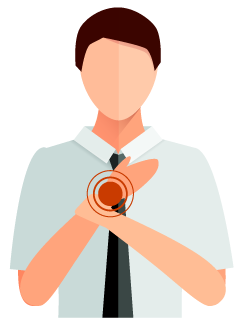 Chris Gregg, physiotherapist and general manager of a injury rehabilitation company, says sitting has marked effects on muscles and bones, especially the neck. Neck position changes dramatically from standing to sitting. Posture in front of laptops is a nightmare because you have to crane your neck forward, causing the loading on the neck to increase dramatically.

And then there is that link between sitting and obesity. Out of 51 studies analysed by Grant Schofield, Professor of Public Health, and Director of the Human Potential Centre at AUT Millennium 2010, 38 studies showed a significant connection between sitting and obesity. It seems clear — when we sit down too much, we expand. A study released in the American College of Cardiology journal that followed nearly 5000 Scottish men concluded that spending two or more leisure hours in front of a screen doubles the risk of heart attack. Once again, exercising several hours a week made no difference. Clearly, the computer has a lot to do with it. Computer technology has created whole industries, felled others, and transformed most of the rest. Where we used to bang fence posts in now, we tap keys.